In praise of failure

I had a recent back and forth on Math.SE with a user that asked whether or not some exercise he found in some textbook is correct. The OP asked not to provide a proof, but rather to confirm if this statement is at all provable. When I asked why not just try and prove the damn thing, the reply was that if there is a typo or a mistake and the statement is in fact not provable, then they would have wasted their time trying an impossible task.

Well. Actually no. When I was a dewy eyed freshman, I had taken all my classes with 300 students from computer science and software engineering (Ben-Gurion University has changed that since then). Our discrete mathematics professor was someone who was renowned as somewhat careless when it comes to details in questions and stuff like this (my older brother took calculus with the same professor about ten years before, one day he didn't show up to class, when my brother and two others went to see if he is at his office, he was surprised to find out that today is Tuesday).

Some thoughts about teaching introductory courses in set theory

Dianna Crown, the physics woman on YouTube, has posted a video where she is interviewed by her editor about why and how she found herself majoring in physics in MIT.

Here is the video:

I am sitting in the 6th European Set Theory Conference in Budapest, and watching all these wonderful talks, and many of them use colors for emphasis of some things. But yesterday one of the talks was using "too many colors", enough to make me make a comment at the end of the talk after all the questions were answered. Since I received some positive feedback from other people here, I decided to write about it on my blog, if only to raise some awareness of the topic.

I've been given the chance to teach the course in axiomatic set theory in Jerusalem this semester. Today I gave my first lecture as a teacher. It went fine, I even covered more than I expected to, which is good, I guess. I am also preparing lecture notes, which I will probably post here when the semester ends. These predicated on some rudimentary understanding in logic and basic set theory, so there might be holes there to people unfamiliar with the basic course (at least the one that I gave with Azriel Levy for the past three years).

Yesterday, however, I spent most of my day thinking about how we---as a collective of set theorists---teach axiomatic set theory. About that usual course: axioms, ordinals, induction, well-founded sets, reflection, \(V=L\) and the consistency of \(\GCH\) and \(\AC\), some basic combinatorics (clubs, Fodor's lemma, maybe Solovay or even Silver's theorem). Up to some rudimentary permutation.

Some thoughts about "automated theorem searching"

Let me begin by giving a spoiler warning. If you haven't watched "The Prisoner" you might be spoiled about one of the episodes. Not that matters, for a show from nearly 40 years ago, but you should definitely watch it. It is a wonderful show. And even if you haven't watched it, it's just one episode, not the whole show. So you can keep on reading.

So, I'm fashionably late to the party (with some good excuse, see my previous post), but after the recent 200 terabytes proof for the coloring of Pythagorean triples, the same old questions are raised about whether or not at some point computers will be better than us in finding new theorems, and proving them too.

I don't usually like to write about new papers. I mean, it's a paper, you can read it, you can email me and ask about it if you'd like. It's there. And indeed, for my previous papers, I didn't even mention them being posted on arXiv/submitted/accepted/published. This paper is a bit different; but don't worry, this is not your typical "new paper" post.

If you don't follow arXiv very closely, I have posted a paper titled "Iterating Symmetric Extensions". This is going to be the first part of my dissertation. The paper is concerned with developing a general framework for iterating symmetric extensions, which oddly enough, is something that we didn't really know how to do until now. There is a refinement of the general framework to something I call "productive iterations" which impose some additional requirements, but allow greater freedom in the choice of filters used to interpret the names. There is an example of a class-length iteration, which effectively takes everything that was done in the paper and uses it to produce a class-length iteration—and thus a class length sequence of models—where slowly, but surely, Kinna-Wagner Principles fail more and more. This means that we are forcing "diagonally" away from the ordinals. So the models produced there will not be defined by their set of ordinals, and sets of sets of ordinals, and so on.

After so many terrible YouTube videos about math, about four months ago Michael Stevens made a really nice video about the Banach-Tarski (Banach-T-Rex) paradox. This video was made surprisingly well by someone who has little to none formal mathematical education, but certainly the desire and [at least basic] prowess to understand that perhaps things are not as simple in mathematics - especially when infinite objects are involved - and perhaps you can't just drop something on your audience in hope they view you as a magician. Instead, Michael tried to educate the viewers, in a fairly reasonable way, about infinite objects and the preliminaries needed for the Banach-Tarski paradox.

You can find that video right here:

I am happy to announce, on behalf of the organizing committee, that the registration for Menachem Magidor's 70th Birthday Conference is now open! 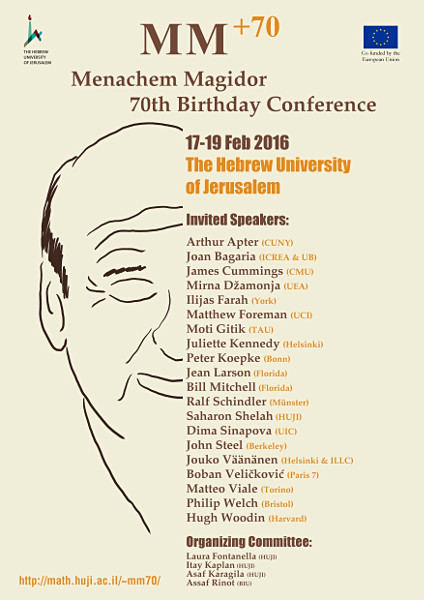 Don't worry about it

In a recent Math.SE question about the foundations of category theory without set theory, someone made a claim that \(\ZF\) makes it hard to learn mathematics, because in \(\ZF\) the questions "is \(\RR\subseteq\pi\)?" and "is \(\RR\in\pi\)?" can be phrased. They continued to argue that there are questions like whether or not hom-sets are disjoint or not, which are hard to explain to people who are "drunk on ZF's kool-aid".

So I raised a question in the comment, and got replies from two other people who kept repeating the age old silly arguments of what are the elements of \(\RR\times\RR\) or what are these or that elements. And supposedly the correct pedagogical answer is "It does not matter what are the elements of \(\RR\times\RR\)." With that I strongly agree, and when I taught my students about ordered pairs on the very first class of the semester, I made it very clear that there are other ways to define ordered pairs and that we only do that because we want to show that there is at least one way in which ordered pairs can be realized as sets; but ultimately we couldn't care less about what way they encode ordered pairs into sets, as long it is a "legal" way.

How do you read a paper?

Some time ago I was talking to some people about how they read a paper. And I learned that I am somewhat significantly different from a lot of people. I spent some time thinking about it, and I arrived at some interesting conclusions.

Continue reading...
Go to the top