My mentor, teacher, mathematical confidant and generally good friend, Matti Rubin passed away this morning. Many of the readers here know him for his mathematical work, many knew him as a friend as well, or as a teacher.

Matti was a kind teacher, even if sometimes over-pedantic.

Recently he was diagnosed with lung cancer. I spoke with him two weeks ago, shortly before I went to the Arctic Set Theory conference, and he sounded positive. He felt that he might not survive this battle, but he was optimistic about the short time era. I was hoping to talk to him once more and to tell him about a student of mine that he would have surely liked.

Alas, this morning Matti left this world. Apparently there had been a sudden deterioration of his condition, and this morning, tired and hurt he left us here. I take solace in the fact that I have known him. I had learned from him. I have created a minuscule copy of the original in my mind, to remind me where I'm being mathematically dishonest while writing proofs ("This is not obvious, and that is not clear").

He will be sorely missed by all of us here.

A photo I took from his logic course back in the Spring of 2009. Probably talking about model theory or Turing machines... 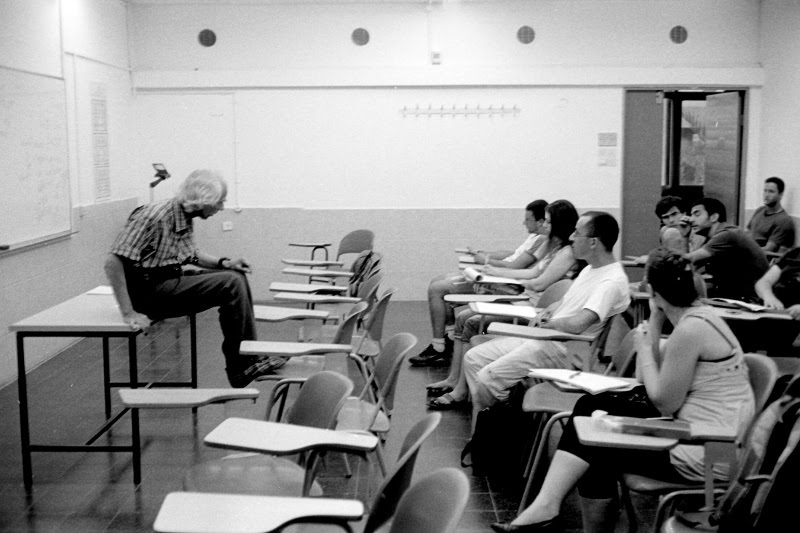 Very sorry to read the terrible news. Like you I also have very nice memories of Matti, both as a top rate mathematician and a human being in the broad sense.

I second Rami's reply.This is so sad. Matti was my former colleague and a good friend. Rest in piece, Matti!

I was very sad to read the news, this morning here. I only spoke once or twice with Matti, many years ago - and then we started an unfinished email exchange a couple of months ago, again. Two of his papers were very inspiring to me - one during the 1990s, another one recently. Thank you for the beautiful photograph, Asaf!